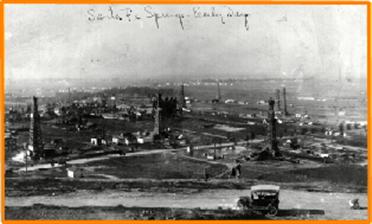 Excerpts from old articles about the Munger Service's founders.

This by the late Dorothy Munger for the Los Angeles Desk and Derrick Club:E.J. Munger's One-Man Oil Daily has Grown with Industry
It all began when my late father-in-law, Ellwood J. Munger, was working as paymaster for Union Oil Co. in Brea. He became interested in visiting surrounding oil wells to make notes on their development for local papers, on his bicycle, outside his office hours. Besides writing a column for the Brea Progress, he learned that oil companies were interested in each other's wells, and when demand for his information increased he decided to leave the Union Oil Co. in 1919 to establish a private scouting service.

His first reports were typed at home with carbon paper duplicates. His timing was particularly good, since Santa Fe Springs was discovered in October 1919. The Huntington Beach boom was June 1920, followed closely by Shell's "Alamitos" 1 discorvery well at Signal Hill. At one time as many as 250 wells were drilling at the same time in Santa Fe Springs.

The business was developed around E.J.'s personality. He made and kept many friends in the industry. As activity expanded, company scouts had trouble covering the whole state. Information was traded, and the Munger Oil Information Service was developed into a neutral clearing house for information.

In the early days, more actual scouting at the wells was done. The emphasis has always been on exploration. A "wildcat" well is one away from known or proven production. This is considered the most exploratory. Then there are "outposts, extension tests, new fault block tests, and new zone tests." Even with all the sophisticated instruments, "oil is where you find it." There is always the element of the unknown. For this reason, information is not alwasys freely given. Our role is to tell as much as we can about each well.

I could tell you many amusing stories about scouting in the early days, that have been passed down-such as dressing in work clothes and riding a load of pipe into a lease to obtain information, or dressing like an investor while scouting a "promotion" type operation. Once at the well, an experienced "scout" can tell what is going on, especially if he can catch a glimpse of the driller's report. This type of intrigue has all but vanished. Currently, counting the number of stands of drill pipe as it is pulled-when changing a bit- is still a good estimate of depth on what is referred to as a "no dope hole."

This from an article in the Whittier News, April 29, 1959: Her Husband's Partner:Whittier Business Woman Pioneered In Oil Reports
Mrs. Frances Munger is one of the leading business women of the West. She is also a widely-known club-woman and philanthropist, and is owner and operator of the Munger Oil Information Service.

In 1919 she and her husband, the late Ellwood J. Munger, were living in a bungalow on an oil lease and he was working in the Brea oil fields.

They observed the need for an oil activity reporting service and decided to tackle the job themselves. With little capital but much hard work they demonstrated that wage earners could become capitalists, and family business could become big business when a sound idea was developed with judgment and effort.

Mr. and Mrs. Munger were full business partners from the beginning. She handles all the finances for the firm.

Both Mrs Munger and her husband were born in California. She did not need to change her name when she married. Her parents were Thomas and Emogene Blakesley Munger who pioneered in San Diego County in 1886-coming from Nebraska. Mrs Munger was born at Sweatwater near Chula Vista. The depression of the 90's upset land values and the Mungers left the ranch for a location at Dehesa northeast of San Diego. Thomas Munger operated the Dehesa store and post office. Later, he operated a hotel at El Cajon.

Mrs. Munger enrolled at Pomona College, and met her husband the first day. Neither Frances Munger nor Ellwood Munger had heard of the other Munger family, although both traced their genealogy to Colonial days.

E.J. Munger was a athlete, and held the high jump record for Southern California for several years. Both he and Frances Munger liked out-of-door life.

Frances and Elwood Munger graduated from Pomona College in 1908 and were married in 1909. Mrs. Munger went to Ventura as a bride. Her husband was then superintendent of the G.C. Powers citrus ranch there.

In 1910, Mr. and Mrs. Munger moved to Los Angeles and he took charge of the first Los Angeles city playground. Less than two years later, the Mungers left the city for Oxnard where he started a small manufacturing business, using eucalyptus wood. The wood did not resist the weather as had been expected, and the venture was not a success.

In 1913, Mr. and Mrs. Munger moved to the Brea oil field and he started to learn the oil business from the bottom. Roustabout, gauger, pumper, paymaster - he advanced one step at a time.

He found the oil industry then practically uncharted and unreported. Few colleges had courses in oil geology. One oil operator could only speculate as to what wells another operator was drilling and what results he was getting, and investors were pretty much in the dark.

Ellwood and Frances Munger became convinced of the need for an oil information service and they started one. Bicycling from well to well, the erstwhile gauger collected production information after his regular day's work. Often Mrs. Munger went with him, and sometimes they did not get much sleep. A horse and buggy replaced bicycles and an auto replaced the buggy. Ellwood got the information and Frances prepared the reports.

The Munger Oilgram lists well starts, owners and locations; depth, amount and specific gravity of the oil; and well abandonments. In addition, the firm has a California oil and gas map service, drilling reports, well history records and annual reports.

One of Mrs. Munger's sons, Averill H. Munger, is manager of the Munger firm, and her daughter, Corlyn Bolster, and daughter-in-law, Mrs. Averill [Dorothy] Munger, are both in the firm's employ.

In 1926, Frances Munger joined the Whittier Woman's Club. She is a past president, and has held most of the club offices. She is a past president of the five-county district club federation. She was long on the district board and the state board, and has served on the national club federation board. During the years of club work she has driven thousands of miles, often to remote clubs. The Frances Munger Club of Los Angeles is named for her. She remains active in Whittier Woman's Club.

In recent years her chief interest has been helping crippled childern to walk. She has been on the board of Casa Colina Home for Crippled Children almost from its beginning in 1938. She often lectures to service groups on home needs, and is working hard in the campaign to raise a million dollars for the home, which is being moved from Chino to Pomona.

Mrs. Munger has traveled in every state in the Union and in Europe, Mexico, Alaska and the Caribbean. She used to visit oil fields in the line of business, but now leaves that task to her son, Averill Munger of Playa Del Rey.

With poise and grace, Mrs. Munger assures visitors that she has made concessions to Father Time and limited her activities. Still, the visitor can hardly escape the conclusion that Mrs. Munger even now carries responsibilities which would frighten most women. -Whittier News, 1959 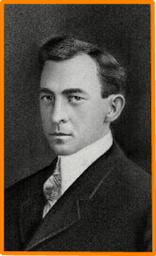